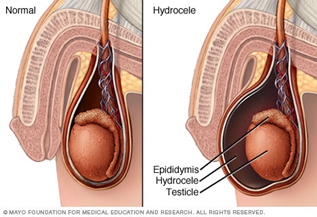 A hydrocele (HI-droe-seel) is a type of swelling in the scrotum that occurs when fluid collects in the thin sheath surrounding a testicle. Hydrocele is common in newborns and usually disappears without treatment by age 1. Older boys and adult men can develop a hydrocele due to inflammation or injury within the scrotum.

A hydrocele usually isn't painful or harmful and might not need any treatment. But if you have scrotal swelling, see your doctor to rule out other causes.

Most hydroceles are present at birth. At least 5 percent of newborn boys have a hydrocele. Babies who are born prematurely have a higher risk of having a hydrocele.

Risk factors for developing a hydrocele later in life include

A hydrocele can form in your scrotum but not bother you much or cause any medical problems. You can try taking over-the-counter anti-inflammatory pain relievers and wait to see if the swelling subsides. Often it will go away on its own within six months.

If the hydrocele gets large enough, it may need repair. Symptoms that suggest you may need to consider surgery include:

A hydrocele can develop before birth. Normally, the testicles descend from the developing baby's abdominal cavity into the scrotum. A sac accompanies each testicle, allowing fluid to surround the testicles. Usually, each sac closes and the fluid is absorbed.

A hydrocele typically isn't dangerous and usually doesn't affect fertility. But a hydrocele might be associated with an underlying testicular condition that can cause serious complications, including:

Risk factors for developing a hydrocele later in life include

In baby boys, a hydrocele sometimes disappears on its own. But for males of any age, it's important for a doctor to evaluate a hydrocele because it can be associated with an underlying testicular condition.

After hydrocelectomy, you might need a tube to drain fluid and a bulky dressing for a few days. Your doctor is likely to recommend a follow-up examination because a hydrocele might recur.

Your First Step Towards Health For Life Starts Here :

Our vision is to bring quality healthcare with human touch within the reach of every individual.